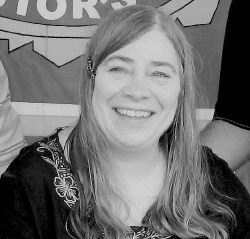 Carolyn Schwebel
Julius Ramsey, president emeritus of the chapter, said Schwebel is a longstanding member of the NAACP and he came to the meeting to represent the group's support for her reappointment to the commission she served on for 17 years.

Ramsey added his voice to others who have advocated for Schwebel. Last month Earl Teasley, president of the Monmouth County Human Relations Committee, told the Township Committee he was "shocked and concerned" that she had not been reappointed to the HRC and said her rights had been violated.

In addition, the HRC has called for her reappointment.

After Ramsey spoke, Schwebel spoke once again in front of the committee as she has done on occasion over the past two months.

A well-known advocate for people with disabilities, Schwebel said that she has continued to attend the HRC's meetings even though she is no longer a member.

The Township Committee did not reappoint Schwebel to the HRC for 2008, citing the fact that she is one of the plaintiffs in a legal action brought against the township for failure to comply with requirements of the federal Americans with Disabilities Act.

The township maintains the lawsuit settlement is not finalized and precludes Schwebel's reappointment, a position she disagrees with.

At the meeting, Committeeman Sean Byrnes called for a mediation session between the Township Committee and Schwebel.

The Democratic committeeman, who took office in January, said he has been sitting on the Township Committee for the past two months and at every meeting has been listening to the controversy surrounding the township's failure to reappoint Schwebel.

At the committee's Feb. 19 meeting, Byrnes said he is frustrated that he cannot speak to the issue due to the outstanding litigation and wants to hear from both sides on the matter.

"I want to get this matter into a mediation session where people can speak freely," Byrnes said. "It's my understanding that in mediation you can say what you want and it is not binding. I know I have some questions about her position at the time and that kind of thing, but right now I can't do that because it is in litigation."

If it isn't possible for the two sides to meet, Byrnes asked if he could submit questions through a mediator that would be answered so that he could fairly consider a request for her reappointment to the commission.

At the HRC's Jan. 24 meeting, members drafted a unanimous resolution in support of the reappointment of Schwebel and composed a letter that was sent to the committee. Schwebel's husband, John, read the letter at last week's committee meeting.

The letter, which Byrnes said he had received earlier that day, reads: "The commissioners all agree that Dr. Schwebel is an invaluable member of the commission," John Schwebel read. "She generously devoted her time and energy to the HRC and made numerous contributions to the township."

The letter went on to say that the HRC had a strong desire to continue to work with Schwebel and members urged the committee to reappoint her.

Carolyn Schwebel later said Township Attorney Bernard Reilly is incorrect in stating that the litigation against the township is still ongoing.

"Mr. Reilly, you may think you know more than the federal judge," Schwebel said. "According to the judge, the litigation itself is over."

Reilly disagreed with her contention that the litigation is settled.

Schwebel said that the Township Committee's continued refusal to reappoint her to the commission has been very hurtful to her.

"I feel that I have been wronged by this committee," Schwebel said. "I feel like I have been raped."

She went on to read excerpts from Maya Angelou's poem "Still I Rise" and stressed certain lines as they pertain to her feelings.

"You may write me down in history with your bitter, twisted lies," Schwebel read. "You may trod me in the very dirt but still, like dust, I'll rise."

After she finished reading, many of the residents in attendance applauded.

No official word on any mediating session has yet been given, but Byrnes said that he was going to continue to look into the matter.

"I need some answers," Byrnes said. "I want to know the facts on this whole litigation matter."