Access has improved since  the Americans With  Disabilities Act

By KEITH BROWN • and BILL BOWMAN • 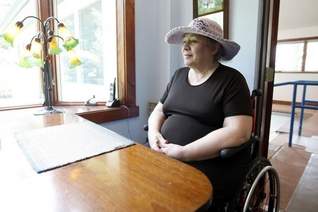 Caroyn Schwebel of Middletown, a long-time advocate for people with disabilities, says much remains to be done to enforce the rights of the disabled. (STAFF PHOTO: BRADLEY J. PENNER)

Twenty years ago, Stanley Soden likely found that  some of the activities most take for granted were at  best troublesome, if not nearly impossible.

Going to the beach? Nearly out of the question. Grabbing a cup of coffee at a local diner? Not likely.  Attending a baseball game? Possibly, but with a  good deal of extra planning.

That was before the Americans With Disabilities Act  — a civil rights act for people with disabilities that  mandates equal opportunity in employment,  accommodations, transportation and several other  areas — which was signed into law 20 years ago  Monday.

Soden, who uses a wheelchair, is a director for a  Long Branch-based support organization for people  with disabilities. He said the passage of the has  made significant changes in his life.

"It has given me access to the beaches, to the  restaurants and places that 20 years ago I would  have never had access to," said Soden, who is a  director of independent living services at MOCEANS.  "The access to me is far greater than it ever has  been."

The act has not proved to be a panacea for those  living with disabilities, experts said. But the   has made possible great strides in improving the  lives of 54 million people — 19 percent of the  nation's population, according to 2005 U.S. Census  figures — who live with some form of disability.

The legislation prohibits discrimination based  on disability in three major areas: employment,
public entities and public accommodations. It makes  illegal any discrimination based on disability in  hiring or firing of employees, by any level of government or transportation run by any  government, or in any public accommodation.

One of the definitions of "discrimination" includes  architectural barriers to allow entry and accessibility  by those with disabilities. All buildings constructed  after 1992 — the effective date of the — have to  be in compliance. Older buildings are not exempt,  but businesses are allowed leeway if modifications  were not "readily achievable," according to the law.

"As far as physical accessibility goes, there have  been great strides," said Sue Pniewski, a transition
and independent living specialist at MOCEAN's  office. "Stores have electric doors that  just sweep open, there are fewer steps, many more  ramps are in place for those older buildings. Many  places are fully accessible."

One of those places is the Americana Diner on Route   35 in . A retrofit of the restaurant was  done in 1997, making the formerly inaccessible  restaurant accessible, according to George  Louzakos, an owner.

"Before we had no handicapped access," Louzakos  said. "We put in wider doors — from bathrooms to  even a dining room door that opens out — the  whole nine yards."

There has been a logical increase in the number of  people with disabilities who now frequent the place,  he said. "I have a lot. It makes me feel good," Louzakos said.  "And they repeat. That's what I like."

But much still needs to be done to fully integrate  people with disabilities, experts say, both in terms  of building access and other activities of daily  living.

Carolyn Schwebel, of said while some  businesses, like the Americana Diner, should be lauded, plenty of others still are not in compliance  with the law.

" is only as good as those who know and fight  for their rights," said Schwebel, who uses a  wheelchair. "You have got to bring complaints to the  Department of Justice or to the courts."

Schwebel is chair of the Middletown Human Rights  Coalition and has initiated lawsuits against  over beach access. She said she thinks  some small business owners do not bring their  establishments into compliance because they think  it is too costly.

"It really isn't," Schwebel said. "The Americana Diner  has a ramp. Oftentimes when I'm there I'll see at least  five people with disabilities. They get a lot of money  out of it because we go there often."

Unemployment, which is currently high for the  general population, also is a chronic problem for  those with disabilities.

"The idea should not be for people with disabilities  to collect Social Security and not work and not  contribute to their communities when they are  perfectly capable and want to," Pniewski said.

Pniewski said that society's perception, or  misconception, of people with disabilities that  represents the biggest barrier.

"We still have this attitude toward people with  disabilities — "oh, poor thing.' Even in our  language, like "wheelchair-bound," or that sort of  thing, rather than seeing a wheelchair as a measure  of freedom."

Employers such as the Lakewood BlueClaws,  however, are trying to change that. The minor  league baseball team partners with the LADACIN Network (formerly Cerebral Palsy of Monmouth and  ) and the Arc of Ocean County to  employ workers from each of those programs —  about 16 to 20 of its 170 game day staff, team  spokesman Jim DeAngelis said.

"This is not a job opportunity where we stick them  in the back," DeAngelis said. "They're on the front  lines as greeters, ticket takers and ushers. They also  work in our concession stand."

Ryan Reilly, coordinator of the Office for Individuals  with Disabilities for 's Department of  Human Services, said he sees examples of  employers like the BlueClaws as emblematic of a  positive trend.

"I'm very hopeful for the future, with the knowledge  getting out there, the info being spread and the  general public getting to understand more of what  the disability community can do, there's great hopes  the future will keep progressing forward."